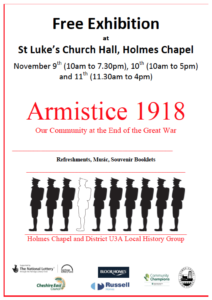 We would like to invite you to attend the exhibition which we have entitled “Armistice 1918, Our Community at the End of the Great War” and is to be held from Friday 9 November to Sunday 11 November at St Luke’s Hall in Holmes Chapel.

The exhibition, which has been organised by the Local History Group of the Holmes Chapel and District U3A will present the story of what happened to Holmes Chapel during WW1 including the arrival of Belgian refugees, the recruiting of servicemen, the impact on life in Homes Chapel and the celebrations and commemorations which followed the war. As well as exhibits there will be music of the period sung and played by various groups from the village and of course refreshments. Much of the story has been documented in a series of booklets which will be on sale at the event.

Rather than an opening ceremony we felt it more appropriate to formally close the exhibition with a few words reminding us of the sacrifice but also the relief and joy that the war was over. It is planned that the bells of St Luke’s will be rung to coincide with this moment.

We hope you will be able to attend at some time but particularly at the closing event which is due to start at 3.30pm on Sunday 11 November and last about half an hour. The exhibition will be open from 11.30 hrs on the Sunday until the closing ceremony.