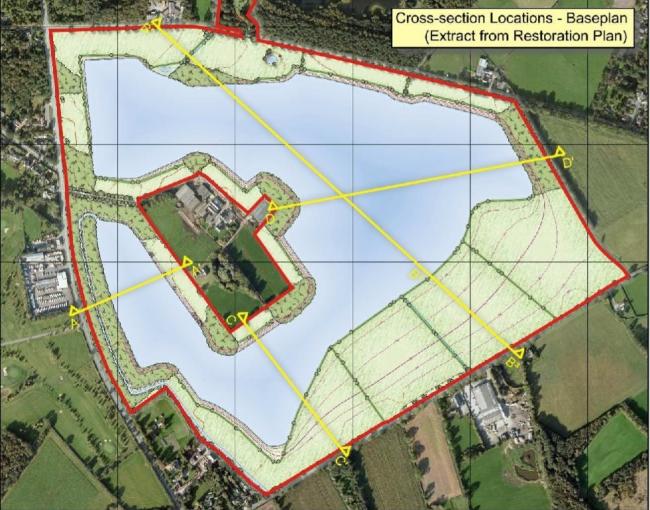 A CONTROVERSIAL scheme to build a sand quarry has moved closer to reality after councillors approved it despite fierce opposition from residents.

Belgian company Sibelco wants to extract 3.3 million tonnes of silica sand from Rudheath Lodge Farm over a 12-year period, with a further two years to complete its restoration.

The farm sits in both Cranage and Allostock parishes, meaning the site crosses the border of Cheshire East Council and Cheshire West and Chester Council.

At a meeting on Wednesday, April 4, members of CEC’s strategic planning board narrowly gave Sibelco the green light to build the site in Cranage.

Cllr Andrew Kolker, Conservative CEC member for Dane Valley, urged the committee not to agree with the recommendation of planning officers, but to ‘consider the scale of the operation’.

“The A50 is already a very busy and very dangerous road,” he said.

“Adding in excess of 100 lorries a day to the road will only add to the congestion and add to the risk.”

More than 260 letters of objection were sent to CEC, with many suggesting the scheme would have an adverse impact on wildlife, cause more traffic and disrupt the local community.

Cllr Mike Cohen, from Cranage Parish Council, spoke to oppose the move – suggesting it would be ‘outrageous’ to allow 10 per cent of Cranage’s area to be used as a sand quarry – while resident Gareth Woods argued the quarry would have an adverse impact on both residents and the countryside.

Green Party member Nigel Hennerley also opposed the scheme, suggesting the sand would be use for fracking elsewhere in Cheshire – but officers told the committee this should not be a consideration in making a decision.

Officers told the board that CEC needs a seven-year reserve supply of sand and gravel and it currently has less than one year’s supply.

Michael Hurley, from Sibelco, added: “It is considered that the effects of the scheme are outweighed by the long-term social and economic benefits.

“The demand is such that we do believe an additional site is required.”

Sibelco currently operates Dingle Bank Quarry, in Lower Withington, which is due to close in 2020 – and the board was told that silica sand is still needed by glassworks in St Helens.

Cllr Lesley Smetham, Conservative, told board members that the quarry is one of two in her ward – with neither causing residents any concern.

“There is no reason to think that this site would be different,” she added.

Cllr Sarah Pochin, Conservative, agreed that the quarry should be approved – arguing east Cheshire has a ‘duty’ to deliver sand that the country needs because it is ‘under our soil’.

But Cllr Steven Hogben, Labour, and independent Cllr Toni Fox both suggested there was a lack of evidence to show silica sand extraction was needed from Rudheath Lodge Farm.

After motions to defer the decision and reject the scheme were both defeated, members narrowly approved the scheme by six to five.

Following the meeting, Cllr Cohen said: “I’m very disappointed in the decision, I don’t think CEC has got its facts right. The report is completely unconvincing and we are completely disappointed with the result.

“I would like to think that CWAC has far more sense than CEC and its members walk into it with their eyes wide open rather than shut.”

Sibelco first applied to build a quarry at Rudheath Lodge Farm in October 2016, with CEC being delegated sole responsibility for the planning application.

The company was asked to withdraw the scheme and resubmit its plans to both CEC and CWAC last February, before this was completed in July.

Sibelco must now wait for CWAC’s decision to approve the scheme within its own borough, which is expected to be made next month.